Rosin is a versatile and adaptive cannabis concentrate, capable of taking on different forms and consistencies depending on its environment and the conditions under which it was extracted. Some rosin looks clear, shiny, and homogenous like sap or syrup. Some rosin appears creamy and whipped like a light golden budder. You’ll even see rosin that looks chunky, wet, and greasy, seeming to float in a pool of its own liquid terpenes.

While consistency and texture of rosin is mostly cosmetic, it does help to tell a story about the way the rosin was processed and cured, and also gives us some insights into the balance of terpenes, lipids, and cannabinoids present in the concentrate. The consistency of rosin determines its texture, body, overall appearance, and how it handles with a dab tool. So which consistency is best?

Consistency in rosin comes down to personal preference. Ease of handling, dosing, packaging, and presentation, and aesthetics are factors to consider. High quality rosin can take on various consistencies, so appearance alone isn’t enough to fully assess rosin. But it is a signal.

What Are The Various Rosin Consistencies?

Rosin is capable of transforming into a variety of consistencies, either fresh off the press or after a curing process. Various rosin consistencies can be described as greasy, glassy, pull n snap, sappy, buddery, saucy, crumbly, oily, waxy. A combination of consistencies can exist as well, as apparent in the diamonds and sauce preparation of rosin.

A buddery, creamy-looking, and opaque rosin defines one end of the consistency spectrum, while the glassy, nearly transparent pull n snap variety defines the other end. The glassy, shatter-like consistency is more stable, while the budder is less stable. Terpene content plays a role in rosin stability, in that higher terpene content will generally lead to a less stable rosin. 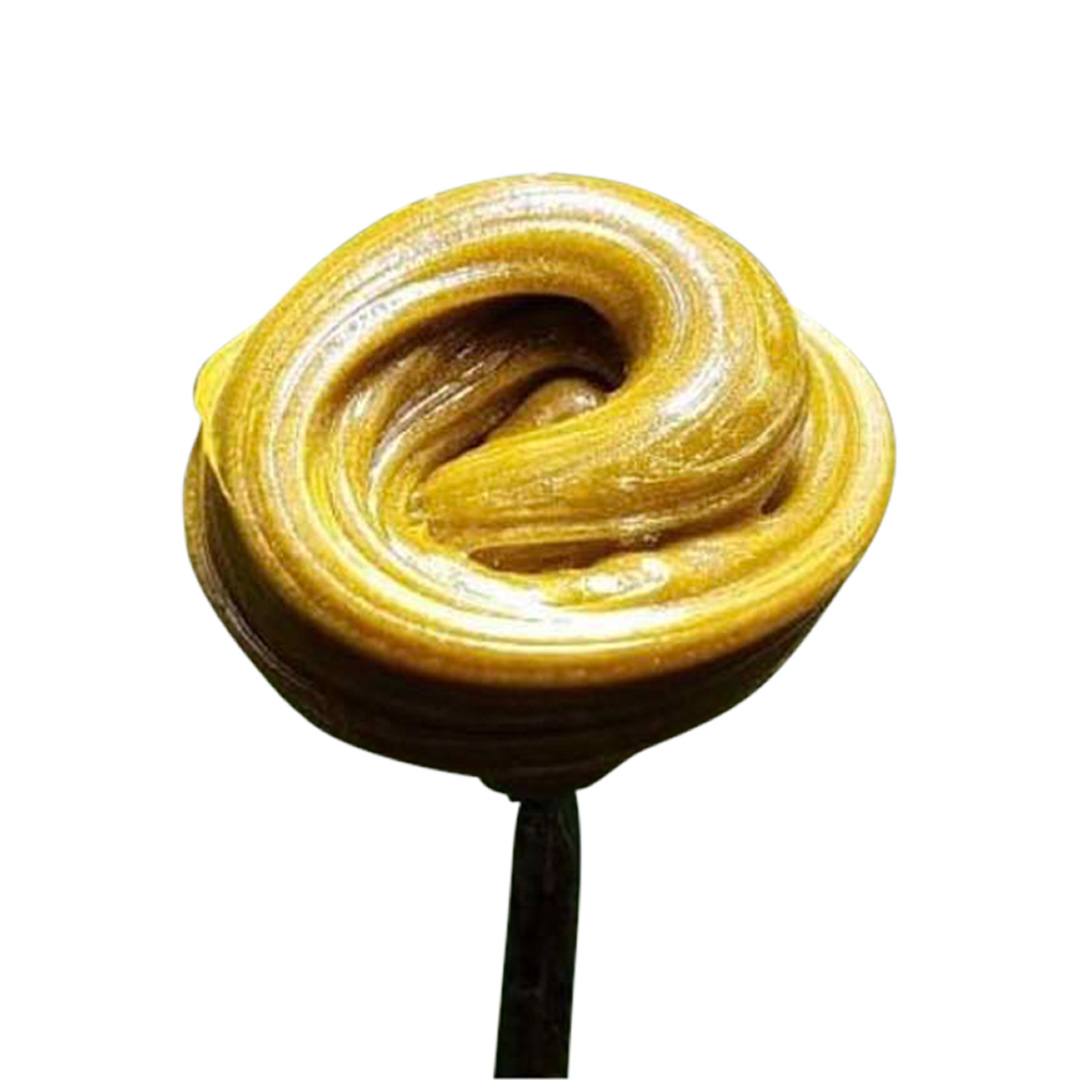 How To Control Rosin Consistency

Factors that determine the consistency of rosin include terpene to cannabinoid ratio, curing methods (warm curing or cold curing), extraction temperature, specific cultivar used as source material, and the quality plus moisture content of source material. One of the main factors in rosin turning to budder is that fresher material will tend to budder with little to no agitation. Material 2 months or older tends to produce pull n snap more regularly.

As a general rule, you can achieve rosin with more of a budder consistency right off the press if you keep the temps low during production. The higher the temperature between the plates, the more likely you’ll achieve a sappy, more runny rosin. Once cooled, this higher-temp rosin often becomes the pull n snap variety.

The method of curing is the best lever to pull when transforming rosin’s consistency. Using Jar Tech, rosin can change from a runny syrup into a solid, creamy, glistening, terp puddle-forming budder. Variations in time spent in the sealed jar, exposure to different temperatures, and agitation (whipping) with a dabber tool are inputs to consider when curing.

We put together a guide on Cold Curing vs Warm Curing Rosin and an article about How To Jar Tech for further insights into the curing process.

If you’re having trouble getting a budder texture right from the press, you can agitate, whisk, or vigorously stir the freshly-made rosin to oxidize the concentrate and help evaporate out the high terpene content, which is what stops the budder texture from taking place.

Another way to get a budder consistency is to leave your fresh pressed rosin in parchment paper overnight. Often, the air transfer between the parchment paper and rosin will be enough to oxidize the material and give your rosin that buddery body.

Let's look at the three main types of rosin consistencies: Shatter rosin is also called pull n snap, and it’s great for easy handling and dosage, as it isn’t drippy or crumbly and keeps a solid form. The pull n snap variety can resemble taffy, and you can spread it apart until it “snaps” and breaks apart. Handling shatter rosin with a dabber tool is easy.

Benefits of shatter consistency aside from ease in dosing include use in pen vapes. If you’re using a pen vape, they tend to like pull n snap, as this consistency will most readily settle into the coil and vaporize completely. Budder can be a little harder to manage in a pen and often needs to be forced down into the coil for a proper dab.

Shattery rosin is stable and “drier” than budder in that it doesn’t contain a high enough percentage of terpenes to separate or nucleate.

Budder, or badder as it's also known, is in high demand and currently sits at the top of the list of most desired rosin consistencies. Budder rosin is opaque and creamy looking, often with a nice glistening coating of terpenes which are naturally separating from the rosin. Budder is often whipped with a dabber tool to reintegrate the terpenes after separation.

Budder has a looser, less uniform consistency than shatter, with a smooth and strong flavor due to high levels of terpenes. Budder can even be transformed into rosin jam or diamonds and sauce, using some heat treatments and curing time in jars. Budder can also become crumble over time.

Cold curing and whipping rosin is a good way to achieve a budder-type consistency.

Diamonds and Sauce rosin is composed in phases. First comes the creation of THC-A crystals, which entails separating the terpenes from the cannabinoids. Next, we use specific extraction techniques to crystalize the acid form of THC, which is THC-A. These form the diamonds.

Then, we recombine the “diamonds” and terpenes to form Diamonds and Sauce Rosin. This is an exquisite looking rosin, appealing to a variety of senses. Diamonds contain an incredibly high concentration of THC-A, which will be converted into its psychoactive form, THC, upon being vaporized. This incredibly strong dose of cannabinoids is complemented by the intense flavors offered by the pools of terpenes in which the diamonds float.

Diamonds and sauce is similar to Rosin Jam, which can often be created simply with the warm curing process. With exposure to heat during the warm cure, THCA will nucleate and terpenes will separate by themselves, so you don't need to create THCA crystals in a separate process. The success of this approach depends on strain, type of rosin (hash vs flower), and other factors. Hash rosin is the best candidate for creating the Rosin Jam or Diamonds and Sauce consistency.

Consistency is one of the first qualities you can gauge when looking at rosin. While it is a useful indicator of the quality of rosin, as well as production and curing methods, it’s not enough to characterize rosin by its consistency alone. Nor does consistency always provide the most accurate signal of top quality in regards to potency and purity.

Extraction techniques and the type of source material used such as cannabis flower (dried or fresh frozen), bubble or dry sift hash, are also important factors to consider. That said, consistency remains a key variable, and it’s one that can be modified to suit the extractor’s preference.

What’s your favorite rosin consistency, and why? Let us know in the comments!

How can you change the consistency of rosin?
The best way to change rosin's consistency is through the curing process, using some form of Jar Tech and either Cold Curing or Warm Curing.

What is the best consistency for rosin?
One consistency isn't necessarily better than the next, it comes down to personal preference. Currently, the demand is highest for a solid, whipped, and badder-type consistency.

What is budder?
Budder is a term for an opaque and homogenous form of rosin that looks a lot like cake batter. Also called badder.

What is shatter?
Shatter is a type of rosin consistency, but it's also used to refer to a type of BHO extract. It looks like frozen sap, hard and glassy.