Tissue culture propagation is a way to copy and preserve cannabis genetics, similar to traditional cloning methods in some ways but different in others. Tissue culture propagation, or TC, is a technique that involves cutting small pieces of plant tissue and placing it in meticulously controlled growing environments where both roots and stems can develop. Essentially, TC is like growing cannabis in a test tube. The process looks more like something you’d see in a scientific lab rather than a greenhouse. Dedication to cleanliness and attention to detail are both prerequisites to a successful micropropagation program.

Unlike growing cannabis plants from seed, taking cuttings from a mother plant allows growers to copy the exact qualities of the cannabis strain, or cultivar, that’s being grown. This makes it easy to replicate success in the garden and fill an entire room with only the winners, the best representation of yield and effect as defined by your unique production goals.

TC has been used for decades with other crops but is only recently gaining a strong footing in cannabis production. There are many compelling reasons that tissue culture propagation is the future of cannabis propagation, and we’ll look at some of them in this article.

How is Tissue Culture Different from Traditional Cloning in Cannabis?

So how is TC different than the traditional method of taking large cuttings from a mother plant? TC is cloning on a micro scale that’s done in a completely sterile environment.

In traditional cannabis cloning, mature branches containing several nodes of growth are removed from a mother plant, and the cut end of the branch is placed into a growing medium such as rockwool. These cuttings are about the size of young tree saplings, anywhere from 4-8 inches long. Rooting hormone is often placed onto the section of the branch that’s inside the grow medium, which increases the likelihood that roots will develop where previously there was only the stem. The growing medium is watered as needed since it’s vital that the root zone remains moist. The upper section of the cutting remains primed to resume growth once a root system develops.

TC requires only a fraction of the starting plant’s material to begin new growth. It doesn’t require full sections of mature branches like the traditional approach. Even a single leaf, a small section of stem, or a seed can be enough to provide the basis for tissue culture propagation. All we need to capture are the meristem cells, which can turn into any type of cell in the plant including roots and shoots.

These pieces of plant tissue are placed in a specialized gel-like formula, which gives the plant cells everything they need to grow. Once these plant tissues develop a root mass and vigorous stem growth, the plantlets can be moved to a long-term grow medium. 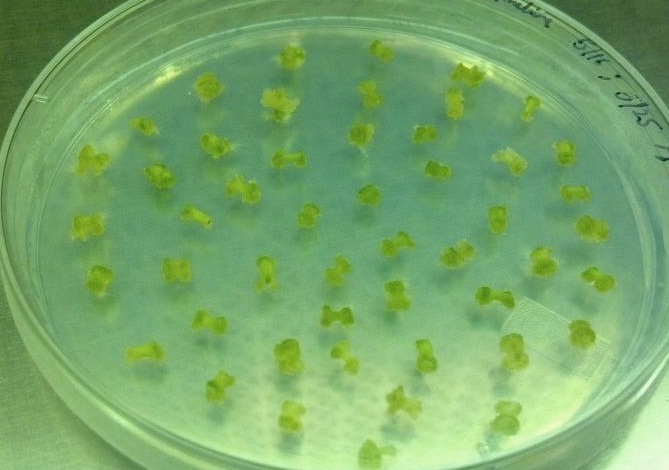 What Are the Advantages and Disadvantages of Tissue Culture?

Advantages
There are many reasons why TC is becoming the predominant practice for large commercial operations in cannabis. For one, TC makes the most business sense for massive levels of scale, allowing companies to meet increasing demands for production without expanding facilities and growing spaces.

Tissue culture propagation can accommodate immense amounts of plantlets in a relatively small amount of space, bringing an added dimension of efficiency to the operation. It is also a highly predictable and repeatable process that delivers consistent results

Other advantages over traditional cloning methods include the ability to eliminate disease from trophy cultivars, “reset” a sick mother plant, and increase rates of germination of older seeds.

TC Requires less starting plant material. You don’t need complete sections of mature branches as with traditional cloning, you only need tiny cuttings from the mother plant to start the next generation of growth. Once the tissue culture is prepared, there’s also less maintenance required.

Tissue culture propagation also eliminates the need for a fully grown mother plant, which often takes up a lot of space in the garden. Rather than preserving prized genetics with a full grown mother plant, those genetics can be preserved in tiny samples of tissues that can be cultivated later.

Disadvantages
Although TC makes the most sense for many operations, it doesn’t come without some downside. For one, there’s a longer grow cycle required. A tissue culture with cannabis plants typically takes 10-14 weeks before it’s ready to begin it’s vegetative growth in soil. A clone taken in the traditional way requires only 2-3 weeks until it’s ready for its permanent grow medium and can begin vegetative growth.

Another downside is the likelihood of microorganisms that can easily gain a foothold in the grow medium. They will contaminate the environment and choke out the cananbis cell growth. Microorganisms seen growing in the medium must be destroyed immediately. Much greater levels of sterilization are required to keep an aseptic environment that the TC requires. Cleanliness needs to be kept at the maximum, exponentially more so than with traditional cloning. Is the most time-consuming and tedious part of the process, and arguably the most important requirement. Keeping everything clean may be simple, but it’s not easy!

How To Do Tissue Culture Propagation

Can You Do Tissue Culture Propagation at Home?

While aseptic conditions can be challenging to achieve at home, it is absolutely possible! Don’t be intimidated by the process. Make space somewhere in your home where there’s light foot traffic and good air quality free of dust and outdoor contaminants like smoke or mold spores. Ideally you will have three separate spaces to do the TC: one to prepare the grow medium, one to transfer cultures, and another to grow out the cultures.

Tissue culture propagation is the future of cannabis cloning! This method is replacing the traditional “cuttings in rockwool” approach that has been a staple of the industry. It’s a great skill to have in your cultivation toolkit.

There are more in-depth guides available to help you execute this process at home. We hope this short article gets you pointed in the right direction.

What’s your biggest challenge with TC? Let us know in the comments!

What is an explant?
An explant is the sample taken from a starting plant that serves as the source of tissue in tissue culture propagation.

What is a plantlet?
A plantlet is the miniature plant that grows out of the starting material in tissue culture propagation.

What are rockwool cubes?
Rockwool is a type of mineral wool, made from spinning or drawing molten mineral or rock materials such as slag and ceramics. It is traditionally used as the growing medium for starting cannabis clones.

What is a meristem?
A merIstems is an unspecialized type of tissue found in plants, capable of producing a variety of different types of cells. These cells can develop into all the other tissues and organs that are present in plants.