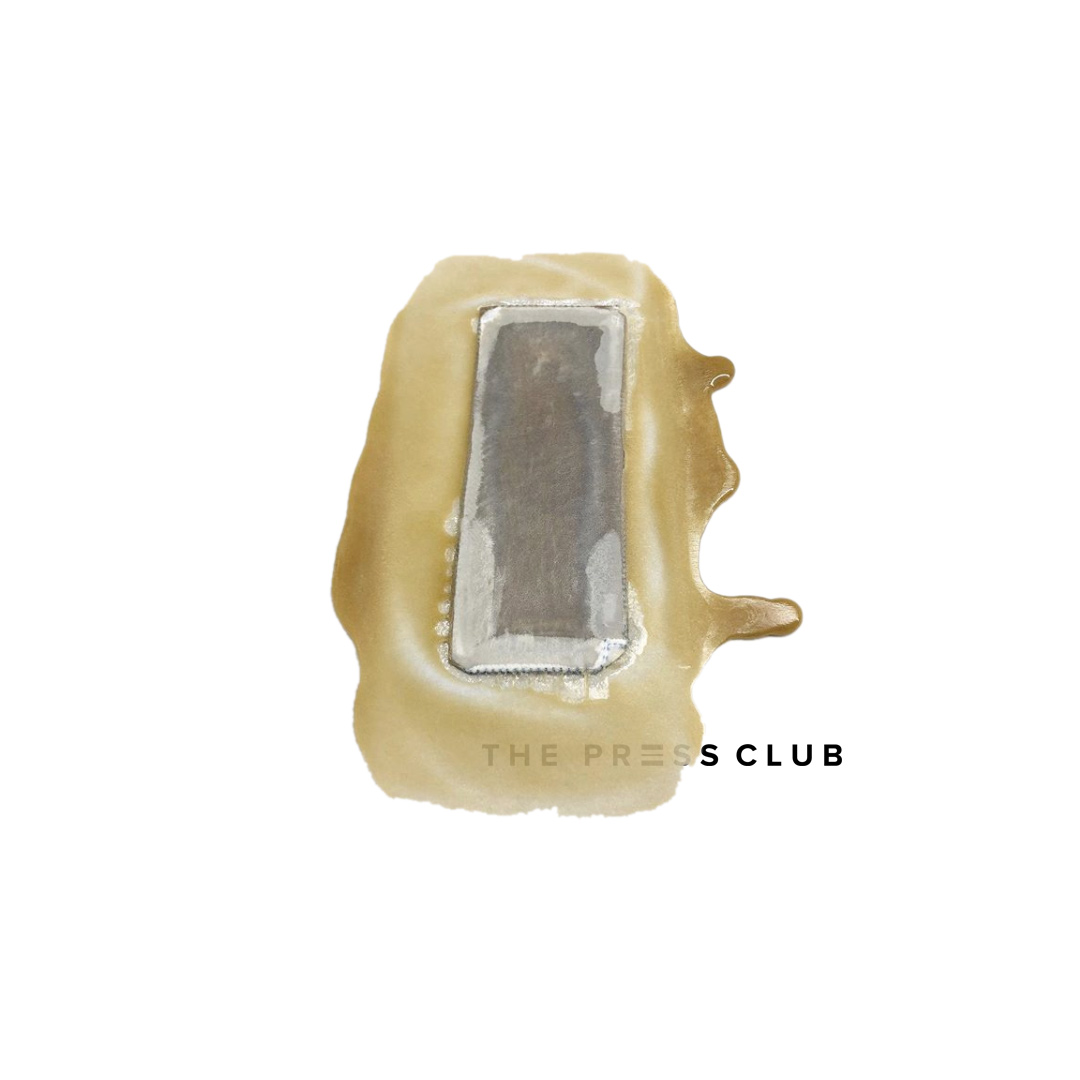 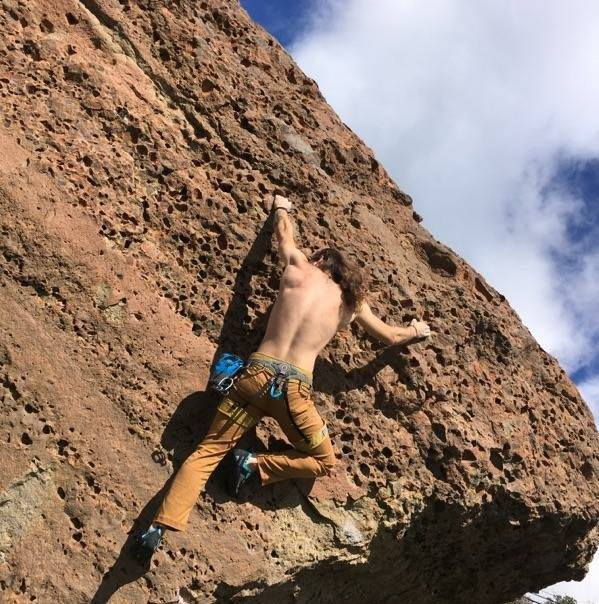 Welcome to the Ultimate Guide to Pressing Bubble Hash Rosin!

Solventless cannabis concentrates like bubble hash rosin are one of the most popular ways to enjoy cannabis and its therapeutic effects. Not only is rosin incredibly pure and potent, lacking any chemical additives or solvents used for processing, but it’s easy to make at home. With a few grams of quality bubble hash, a press, some basic gear, and knowledge of the process, you can get started pressing exceptional bubble hash rosin today!

The following guide was designed to help you navigate your initial setup, purchase the basic equipment needed, understand the variables of time, temperature, and pressure during extraction, cover common mistakes to avoid, and provide simple tips to keep in mind when pressing bubble hash rosin.

What is Bubble Hash Rosin?

Bubble hash rosin is rosin that’s extracted from bubble hash. Bubble hash is a form of solventless cannabis concentrate, composed of trichome heads that are separated from the rest of the plant using ice cold water and agitation.

In its earliest days, rosin was created by squishing dried and cured whole cannabis flowers between heated plates, like a hair straightener or a t-shirt press. Flower rosin is still incredibly popular today! However, as solventless techniques quickly advanced, more efficient and effective equipment was developed and different cannabis material was being pressed. Then, people started experimenting with pressing bubble hash, using lower temperatures and getting massive yields.

Unlike other extraction techniques that utilize chemical solvents and closed-loop systems, the process of pressing hash rosin is straightforward, simple, and easy to accommodate in a small space with a limited budget.

Using a press and temperatures-controlled plates (even a hair straightener will work!), heat and pressure are applied to bubble hash loaded in filter screen bags, known as rosin bags. This heat and pressure causes the trichome heads to burst, and the resulting oils to liquefy and run through the filter bag. The outflowing cannabis concentrate, which runs from the bag and onto parchment paper for collection, is the hash rosin we’re after.

As the cannabis industry continues to develop and mature with innovations in solventless extraction leading the way, bubble hash rosin has claimed its place at the pinnacle of the cannabis concentrate experience. Bubble hash rosin provides incredible flavor, capturing the essence of the plant from which it’s extracted, opening the way for a deeply therapeutic, full body-and-mind experience.

Bubble hash rosin delivers a complex high that accurately reflects and amplifies the whole plant. This rich and full spectrum experience stands in contrast to the one-dimensional sensation that can be accompanied by other concentrates like BHO or C02 extract oils.

Bubble hash rosin is extracted using the same basic mechanics that are used to create flower rosin. You can use the same press, the same plates, and most of the same equipment. To learn more about pressing flower rosin, check out our comprehensive guide here.

The variables of time, temperature, and pressure are key to control throughout the extraction process. It’s also important that you’re preparing the source material and choosing the correct micron bag in order to make truly great bubble bubble hash rosin.

So let’s walk through the process of pressing bubble hash rosin. Quality hash rosin all begins with quality hash.

Which Strains Am I Working With?

Quality should be the ultimate goal when pressing hash rosin. Without quality bubble hash, quality rosin isn’t possible. Seeking the most worthy cultivars for the job is a great first step to getting started. See the list of best strains for bubble hash here. 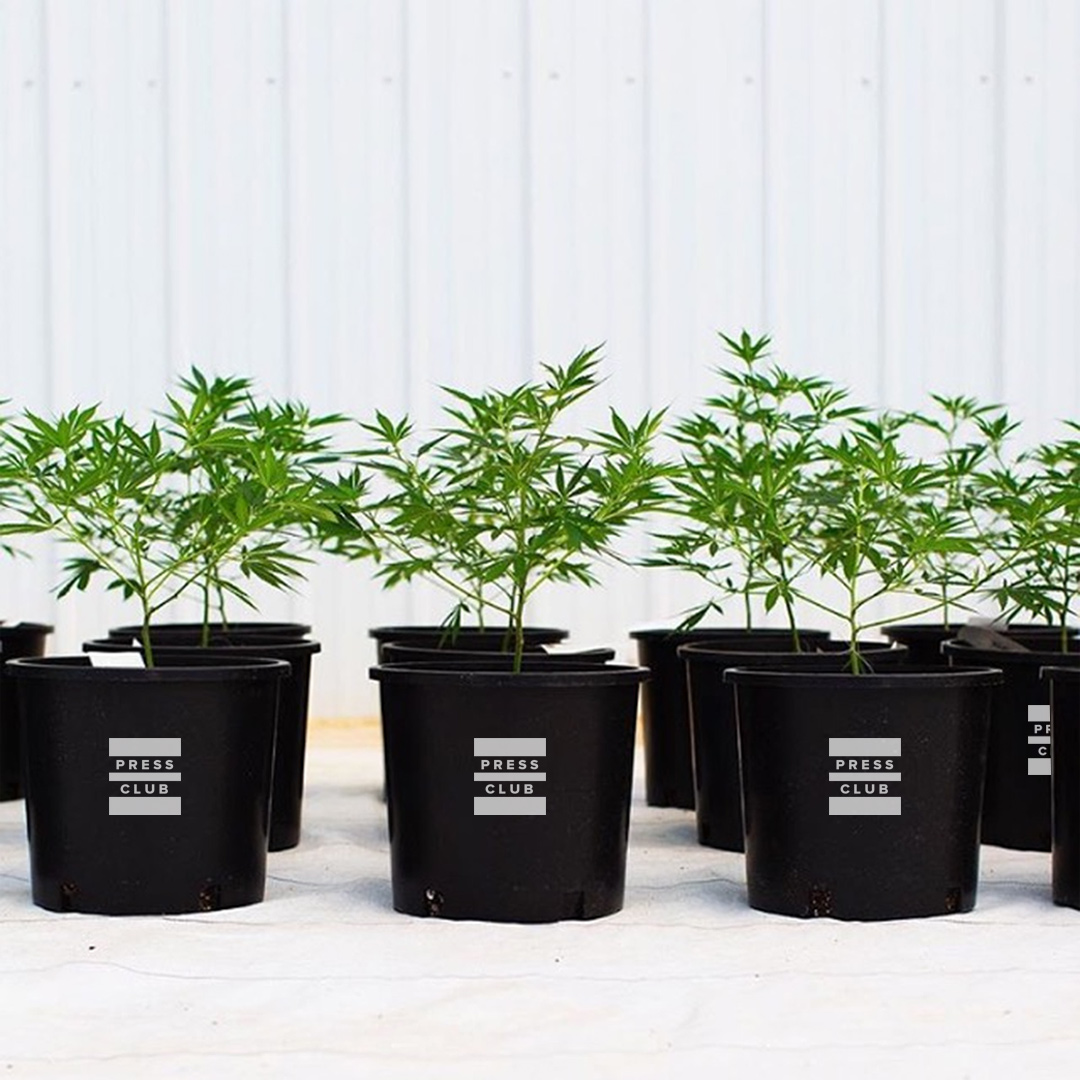 Even with everything else dialed in, if you’re not working with great plant genetics, your rosin will be lacking. Don’t limit yourself to the list of best strains for rosin, but be open to experimentation.

Hash for pressing rosin is preferably in the 3-4 star range. If you have 1-2 star hash that’s probably better for making edibles, and 5-6 star hash is of such supreme quality it can be dabbed on its own. Learn how bubble hash is rated here.

If you’re able to wash your own bubble hash, you’ll have the advantage of being able to control quality. Use our step-by-step guide to learn How To Wash Bubble Hash here.

The bubble hash should be fully dried and ideally in a sandy/powdery texture. This is easiest method with the highest quality to achieve is with a freeze drier, although microplaning and air drying will also give you good results.

How Much Source Material (Bubble Hash) Will I Have?

Knowing how much bubble hash you plan to press will help you determine what type of press and what size of rosin plates you need to work with. If you’re only pressing a few grams of bubble here and there, a hair straightener will be enough to get you started and familiar with the process. Learn more about pressing with a hair straightener here.

If you’re growing your own cannabis and are producing your own steady flow of hash, building an H-Frame press at home and purchasing quality rosin plates will probably be the most effective approach.

Do you need to grow your own cannabis to press rosin? Absolutely not! But it can be beneficial. Learn more here. 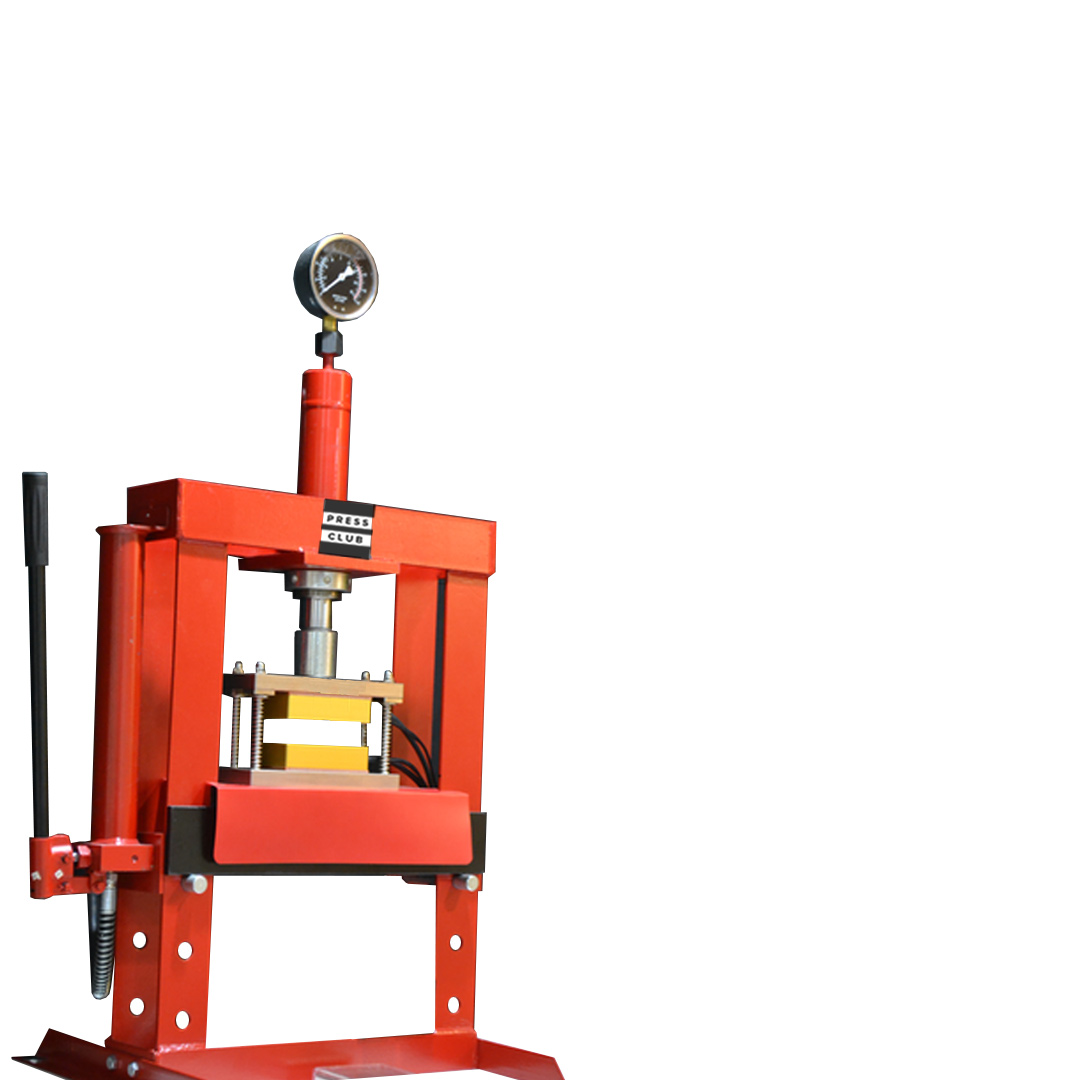 One of the first things to decide is which type of press you’ll use for rosin extraction. How much source material you plan to process will dictate what type of press you should use.  It’s not feasible to press quarter pounds of hash with a hair straightener (but it has definitely been done!) and likewise you don’t need a 20-ton press if you’re just squishing a few grams here and there for personal use.

After you determine how much source material you’ll have and the amount of hash you’ll be pressing on a regular basis, it’s time to come up with your rosin press set up.

What Kind of Press Should I Buy?

When you’re just getting started pressing bubble hash rosin, a great option is to build your own press. You can use an H-frame hydraulic press in combination with a set of rosin plates and be good to go. This homemade approach is not only cost-effective, but it gives you the chance to customize your setup to best fit your situation. Learn how to build your own rosin press here.

Also, check out this article for a good review of the best types of presses for rosin.

In addition to the press itself, the rosin plates you choose will be a key component of the process. Quality aluminum rosin plates ensure accurate and consistent heat delivery, a critical variable to control. Find premium rosin plates from The Press Club here.

What Other Equipment Do Need?

To see a more comprehensive list of equipment needed to press rosin, check out this article.


Microns measure the fineness of the screen filters that comprise rosin bags. Higher microns (like 160) have larger gaps in the filter screen, while the lower microns (like 15) have very tiny holes. For bubble hash rosin, we want to use rosin bags in the 15-37 micron range.

Read more about microns and how to select the right micron here.

Use a funnel to fill the bags with bubble hash, making it so the hash comes up to about 75% of the bag and fills it about .5 inches thick. High grade hash will expand quite a bit inside the bag during the press. The bubble should be packed somewhat tightly but not rock hard, and even distribution is critically important. 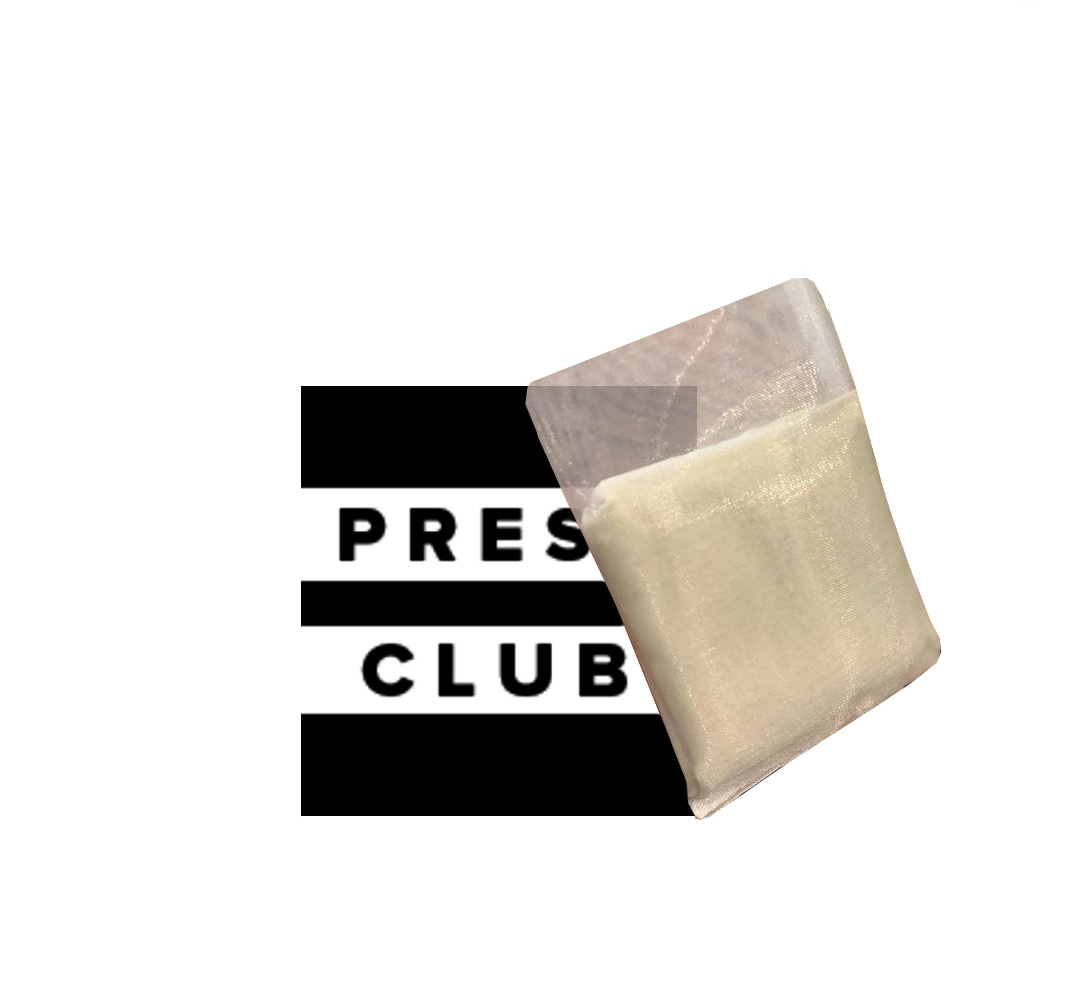 An extra benefit of the funnels from The Press Club is that they keep a static charge and therefore collect hairs and other particulate contaminants that may have inadvertently slipped into the hash.

If the hash is not in a sandy and powdery consistency, you can mold the hash in your hands into a small puck that fits inside the rosin bag. Depending on the quality of your hash, sometimes it’s easier to flatten the hash simply using your hands, into a flat disk that fits into the rosin bag. A prepress is a good idea at this point, to help fill the inside of the bag evenly and minimize any gaps between the bubble hash and the edges of the rosin bag.

Pre-pressing The Rosin Bag and Hash

After working the bag with your hands, use a pre-press mold to further compact the material and ensure that it’s spread evenly throughout the rosin bag. Pre-pressing the hash locks the material together, further eliminating inconsistencies in the packing of the material.

Read more about how to use a pre-press mold here.

Make sure that after placing the rosin bag into the folded parchment paper that it lines up directly in the middle of the rosin plates during extraction. 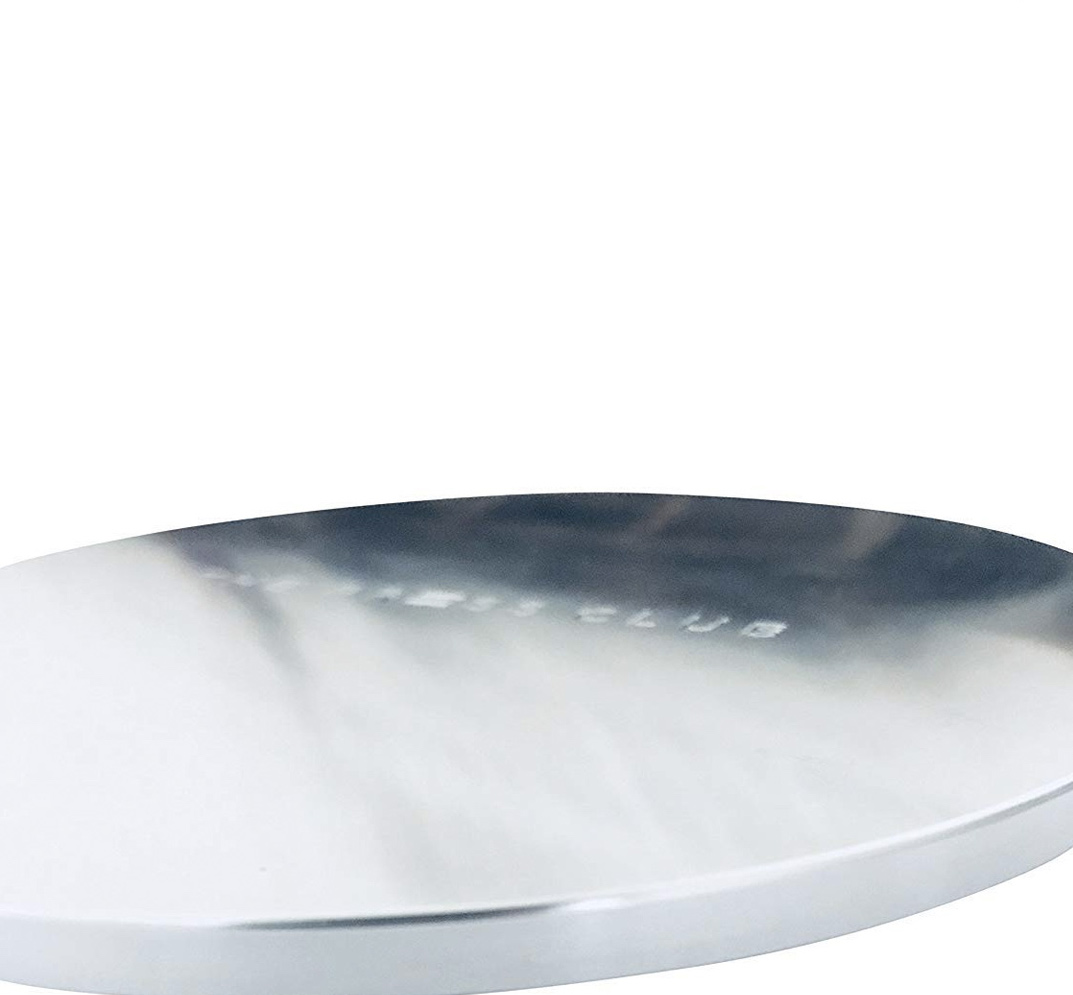 Gently do several quick heat stamps by pressing down onto the bag for a second or two and then releasing. Do this a few times to allow the oils to start flowing through the filter. This helps all the trichome heads expand to where they need to be for extraction inside the bag and so they’re not sliding around throughout the press.

It’s best to aim for as low of temperatures as you can get away with, without losing a significant amount of yield. 160-190 degrees Fahrenheit is a good window to aim for. Be sure to start with a lower PSI and gradually increase to full pressure over time. You don’t want to immediately press to the full pressure, as this will likely cause a flood of rosin and a blowout of the rosin bag. The goal is for a slow, steady, and consistent flow, not a raging river of rosin all at once.

As far as pressure goes, we’re interested in the pressure at the point of the rosin bag, or the Platen PSI, not the reading on the pressure gauge of your press. To learn how to calculate Platen PSI check out this article. A good target for Platen PSI when pressing bubble hash rosin is 350-750 PSI.

Total time of extraction (beginning after the quick heat stamps) should be around 60-90 seconds, or until the rosin stops visibly flowing through the filter and onto the parchment.

How To Cure Bubble Hash Rosin

Best Ways To Use Rosin

Once the hash rosin is cured you can dab it, or find other ways to use your rosin. Here are some ideas about how you can use your bubble hash rosin.

Want to reuse the pressed rosin bags, or rosin chips? Find out how to use the spent rosin bags and material in this article.

You’ve navigated the bubble hash rosin extraction process and you’ve got some homemade hash rosin to enjoy. We hope this guide has been helpful in starting you off in the right direction. There’s so much more to learn and innovation with new ideas is one of the most exciting things about the solventless extraction space.

Remember to try to keep it simple. Complexity is the enemy of execution. Remain open-minded, experiment, and take notes as you progress and get more presses under your belt. By collecting data for each press, you can refer to previous results and accelerate your learnings as you adjust variables in the process. This article helps with taking notes and collecting data. 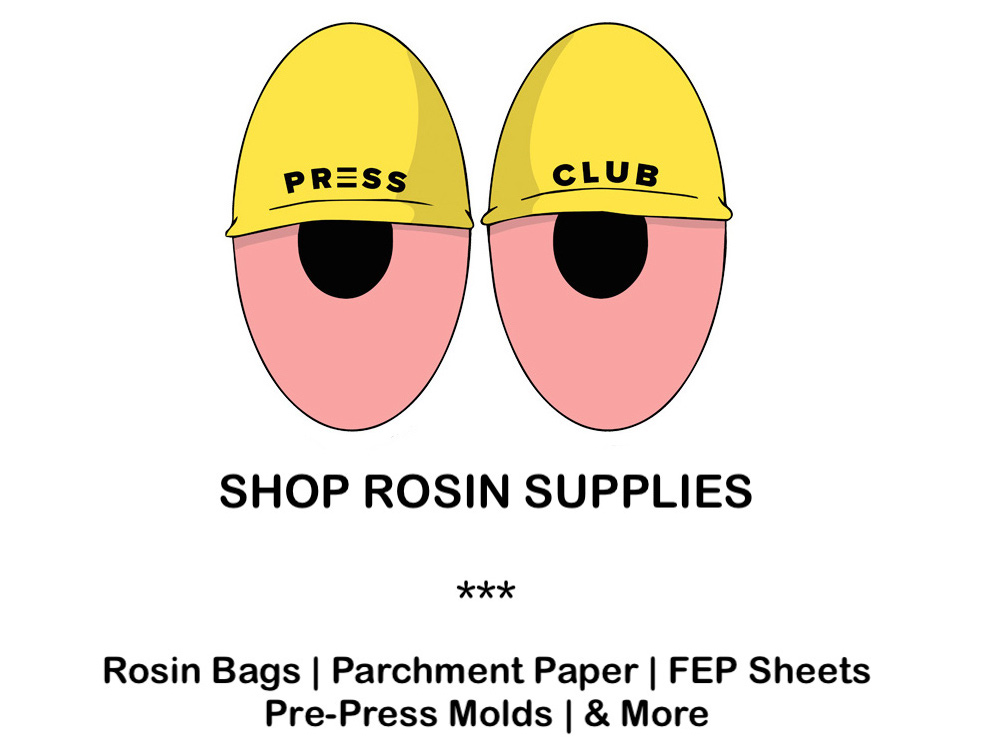